A couple of month's ago, a sign appeared on a vacant window in Bolton advertising a new cafe selling vegan and vegetarian food, which created quite a lot of interest in the Bolton Vegan and Vegetarian group (BVVAR). I watched whilst waiting for my bus home after work as the sign turned into The Healthy Indulgence Cafe. 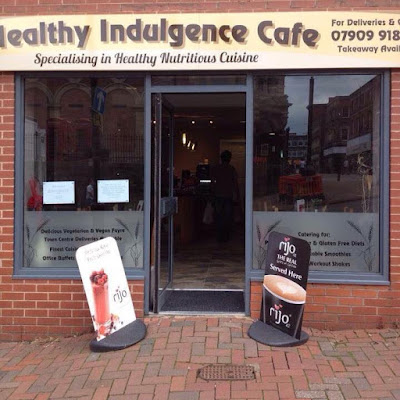 The Healthy Indulgence Cafe opened in late June, and although it serves meat, they do cater for vegan and vegetarian diets and have received positive reviews from day one.

Apart from The Kitchen on Great Moor Street, and the Pizza Express that is hidden away down a back street, there isn't that many vegan friendly places in Bolton, so when a new place opens offering us somewhere else to eat, we all get very excited.  So we were all very happy when BVVAR arranged an afternoon tea in their relaxation room.

On arriving, I wasn't too sure what to expect, I was a bit wary of the word 'relaxation' room, I had awful visions of tie-dye and sitting crossed legged on a carpet trying to see through a fog of incense sticks. NOT that there is anything wrong with that, it just isn't me. But I was happy to find that the room was modern and we had chairs and bean bags to sit on and instead of incense there were candles and stylish statues of Buddhas.  In fact, it was more like a tranquil sitting room, and I immediately felt at home and relaxed. 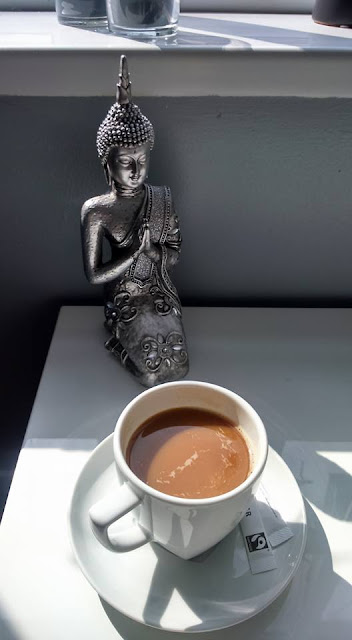 After everyone arrived and was settled with their drinks, we headed over to the food table to fill our plates with various wraps, salad, cous cous and cakes (of course). 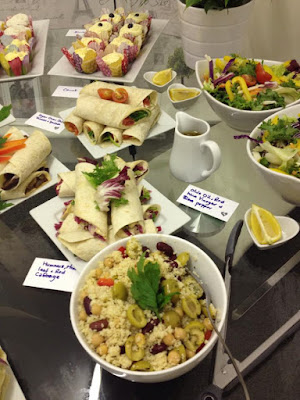 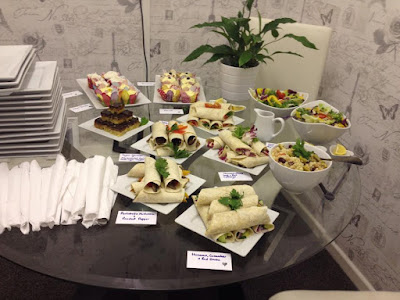 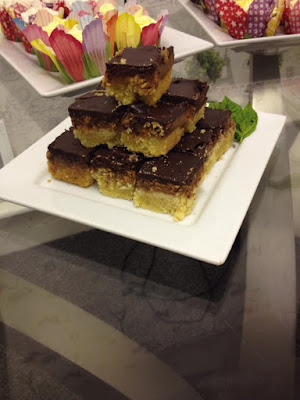 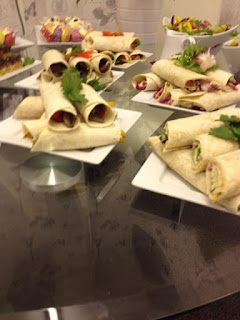 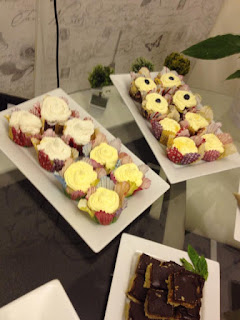 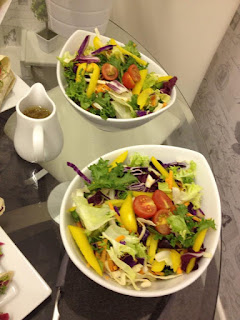 I don't know what all the flavours of wraps were, because as far as I'm concerned, as long as it's in a wrap, it's all good so I wasn't really paying attention to any signs.  However, there were a few with hummus and various types of filling, one with vegan cream cheese and one with vegan sausage. This is where the tie in to today's Vegan MoFo theme is- best sandwich ever.  My theory is, if it's in a wrap it's a million times better!

There were four different flavours of cupcakes (carrot, blueberry and two more that I forgot what they were) and two other desserts, which I think were flapjacks- one with chocolate and one without (note to self: need to remember to write down what things are instead of just diving in!) along with cous cous and impressive looking salad. 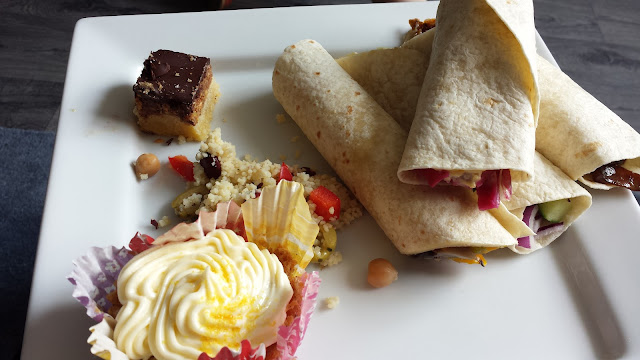 I ended up with a selection of wraps, a carrot cupcake, cous cous and one of the other desserts. Out of all the wraps, my favourite one was the sausage and I really enjoyed the cupcake, which turned out to be carrot and walnut rather than just a carrot cake.  I ended up having a blueberry cupcake as well that was left over, which was also really nice.

I really enjoyed the food at The Healthy Indulgence, and the staff were all very welcoming and friendly.  I will definitely be going there again to try their day menu, especially as I spotted that they were able to offer vegan milkshakes, and it's great to have a second option in Bolton town centre. Especially if you're out with omnis who are not too keen on going to a completely vegetarian venue like The Kitchen.

I also spotted that they are looking to open the cafe on Friday and Saturday evenings as a vegetarian restaurant, which is super cool :-)

Thank You to Rachel West and Chloe Woods for agreeing to let me use their photos.
Posted by Unknown at 02:18